That's all for now, hopefully we'll get some games in for week 6 tonight or tomorrow.
Posted by Tom at 9:10 AM 53 comments:

Arena after the patch - Put your head down and trudge on

Now some of that is me. But it turns out a lot of it was my warrior partner. He had regemmed for STR from Armor Pen. Well folks I can tell you that even after the armor pen nerf your warrior should stick with it. Tuesday night my warrior is crying out in dismay on why he's critting clothies for 1-2k damage. I'm crying out because of a new humongous 21 second CD between stuns....the rating tanks from 1807 to 1778.... I call it after 10 games in disgust and go pick up my Relentless Gladiator Cloak of Dominance before the rating slips under 1750 and I become ineligible.

So what does this mean for Prot/Warror 2's?

#1) The warrior needs to stick with arm pen. I dont' have the math or theorycraft but I have a combined 30+ arena matches this week with Jeddak CLEARLY saying arm pen is better. He'll also be picking up a mace next week for an added 15% arm pen on top of that. He's talked to a couple top level warriors on our relm about it and they all agree...even after the nerf if you have the Attack Power already (say 4k) stick with Arm Pen.

Now, let's break down how the nerfs have affected me:

Touched by the Light: ( provides 20/40/60% of the paladin’s strength as spell power instead of 10/20/30% of the paladin’s stamina.) - Surprisingly very little noticeable difference here. This change dropped my spellpower by about 400 but between the mace and cloak upgrades I actually only lost 135 spellpower from last week, and with the huge crits provided by Sacred Shield I'm still spamming FOL quite successfully.

Judgements of the Just: The reduction in cooldown to Hammer of Justice provided by this talent has been reduced to 5/10 seconds instead of 10/20 seconds.

OK THIS IS THE HUGE, UGLY, KEYBOARD BANGING, VENT YELLING, MOUSE THROWING nerf. It's MUCH worse than even I feared. out of the 19 losses this week, I can attribute at least 9 to having my HoJ a few seconds off cooldown giving a healer that one big heal to get back up to 50-75%, effectively resetting the mach. OR not being able to stop a nice long 10-15 second chain CC because I couldn't stun back.

It's so frustrating seeing what would have been a win last week turn into a loss this week, specifically about this nerf. The problem is that with both stuns on the same 30 second CD timer you now have a full 21 seconds of nothing between stuns. This is up almost 100% from the 11 seconds between stuns we had before the patch.

I've even put a post up on the pvp forums requesting the HoJ stun to be reduced to 25 seconds from 30. You can see the article (and my logic) here. Yeah I don't expect much sympathy but this is such a big nerf it's just crazy.

BOTTOM LINE: Prot isn't going anywhere in 2's. The excellent mana regen and heals are still there, the CC is sort of there, and (so far) it seems to still be working.
Posted by Tom at 12:01 PM 5 comments:

I can't stand up right now, because blizzard just shattered my knee caps with their NERF bat.

I was hoping for at least one more week, but clearly I'm not going to get it. What does this mean to me, well clearly it's going to be harder to stay at a high ranking. Not only is this set of stuff a huge nerf, most other classes are getting buffed!?!?!

No one's surprised about these nerfs coming, even I know a little something should change. But the loss of roughly 400 spellpower is hard to swallow. However, one can make up some of that with gear. Loosing 10 seconds of cooldown on a stun however, that's just unpleasant.

I'm unclear on how much the Ardent Defender change is going affect me. At the end of the day we'll see how the rating goes. I should be hitting some games tonight so we'll see what happens.
Posted by Tom at 8:17 AM 5 comments:

As promised I'm going to write about how to beat a comp that was giving us problems these last couple weeks, warlock/healer.

Traditionally in 2's if there's a healer you go straight for them. I interrupt the heals and the warrior beats them into submission! When it's a warlock though, this strategy has been a big FAIL for us. Despite my partner's high DPS the constant fear's the lock puts out doesn't let my warrior partner put out enough sustained damage, giving their healer a much needed break to heal to full.

Our next though was for me to CC the warlock and the warrior continues with the healer. Unless the healer is very squishy, it's a fail again. I have about 9 seconds of CC followed by a 11 second break. Easily enough time for that fear to strike, especially with resilience keeping the healers up longer.

So we moved on to the Warrior beating on the warlock, and me CCing the Healer. WIN ! With me interrupting the first two heals the warlock is usually pretty low on health, forcing the healer to spend precious mana on large inefficient heals and/or blow a trinket to get out of one of the stuns. 11 seconds later I rinse and repeat.

If we're especially lucky the warlock panics a bit and LOSes his healer allowing a quick victory, if not my excellent mana use/regen allows us to win a protracted mana war, since the healer is feeling too pressured to start mana draining or CCing me too much.

Of course I've been seeing a lot of Druids as healers and the good ones will chain Cyclone me. This becomes a question of who can CC the best, me or the Druid. Many times with this comp we need to switch to pressuring different members depending on how low their mana is. If we can force those big, mana ineffienct heals or get the lock to blow most of his mana right away we come out on top....eventually
Posted by Tom at 12:46 PM 1 comment:

That's right folks, Jeddak and I hit 1807 in 2's last night. I immediately called a stop and let the points roll in on Tuesday. That means on Tuesday I'm going to have a nice shiny Relentless Gladiator's Gavel !!

I owe it all to a decent partner and the Prot/Holy spec 19/52/0. This spec is insane, with two available stuns on short cooldowns and excellent survivability. Considering that our win percentage last night was 75% (15-5) with gear upgrades I'm thinking 2k might even be possible for the first time ever!.... At least until the nerf comes thru.

I'll talk a little bit about some match strategies in a later post, but for now I'll mention the match that put us over the top.... It was a priest/rogue combo. We head out and I put Blessing of Sacrifice on my partner along with Sacred Shield. The rouge does his stun on me and we wait for the priest to show himself....Somethings different about that priest though

He's Shadow! ... Now I haven't seen a shadow Priest in arena since climbing out of the 1500 bracket and I'm not very familiar with their spells. But but I pop Hand of Freedom on Jed yell at Jed to wail on the guy. I use both of my stuns to lock him up and he's almost dead... to easy!

BUT WAIT... he turns into a purple ball and is basically immune to Jed's attacks. So Jed switches to the rogue. Suddenly the priest reverts back to his normal form and we start taking a lot of damage, my stuns aren't up yet - the rouge is back at 100% health and I'm thinking OH NO don't screw this one up!

Jed hops back on the priest and combined with HoF and my 2 back to back stuns we have the priest dead shortly. Wrap up the rogue and it's 1807 team rating!

Next time I'll talk about one of our problem comps (Warlock/Healer) and how to beat them.
Posted by Tom at 12:50 PM No comments:

Rumors of 2v2 death have been greatly exagerated

So you may have read that 2v2 is dead. Blizz has mandated that only 3v3 and 5v5 teams will be eligible for a Gladiator title and weapons. They will also not balance around 2's.

This has effectively killed off the 2v2 bracket with everyone rolling 3's teams, right? WRONG! In fact almost nothing has changed.

What do you say Drunkenclod? Have you been hitting the alcohol particularly hard this morning?

No sir.. but as they say in WOW "Screenshot or it didn't happen"... Sure I got your screenshots right here baby! Check out my excellent article from May of this year (aka season 6)
http://blessingofmight.blogspot.com/2009/05/finally-3s-team-but-no-one-to-play.html

Why is this? All but 2,200 rated gear is available in 2v2 play, points earned are the same and on the blizz forums (unofficially at this point) it seems that titles EXCEPT for gladiator will still be awarded.

So if you were playing arena in S6 at under 2k keep on PWNing and getting PWNed in S7 - Everyone else is!
Posted by Tom at 9:29 AM No comments:

Ever get tired of plugging numbers into the amory? I sure do. Here's a little cheat sheet on all brackets from 1500 - 2000. Since now fifteen hundred is the lowest points you'll get as long as you play ten games a week you'll get points as if you rated at fifteen hundred.

I find that to be beneficial for me for time managment. If I know I'm getting 344 points for 5's this week and there's no way I'll be able to get 1550 in 3's I can skip it since I'm already getting more points- make sense? 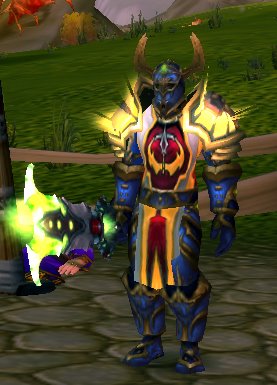